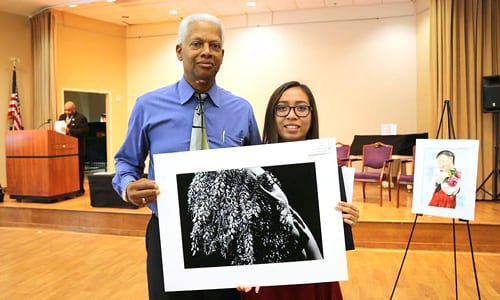 Congressman Hank Johnson (GA-04) announced the opening of this year’s Congressional Art Competition for all high school students who reside or attend a school in Georgia’s Fourth Congressional District.

“Each year, we gain a new appreciation for every piece of art entered for our annual competition because no matter what colors they use, no matter their interpretation, this is their art,” said Johnson. “Freedom of speech and freedom of expression are rights we hold dear, and I’m sure all of the pieces submitted will speak to us in some way.”

Each spring, the Congressional Institute sponsors a nationwide high school visual art competition to recognize and encourage artistic talent in the nation and in each congressional district. Since the Artistic Discovery competition began in 1982, more than 650,000 high school students have participated.

Since 2007, more than 650 Fourth District students have competed in Rep. Johnson’s annual event. Last year’s winners in the 2017 competition were awarded four college scholarships worth a total of $47,000.

The Grand Prize Winner was Michelle Carmona, a senior from Brookwood High School. Carmona was awarded a $24,000 scholarship to the Savannah College of Art & Design (SCAD) for her “Nature” photograph.

Students submit entries to their representative’s office, and panels of district artists, educators and leaders select the winning entries. Winners are recognized both in their district and at an annual awards ceremony in Washington, DC. The winning grand prize winner’s work is displayed for one year at the U.S. Capitol. The first, second and third place winners will be displayed in the congressional district office. Also this year, all work will be unveiled under Congressman Johnson’s “FULL STEAM AHEAD” program on the education exhibit hall at the High Museum of Art in Atlanta during the month of May 2018.

All entries are due to the Congressman’s District Office, 5240 Snapfinger Park Drive, Suite 140, Decatur, GA, 30035, by April 13. For more information, rules and guidelines for the 2018 competition, visit https://hankjohnson.house.gov/serving-you/art-competition or call Xeron Pledger or Eric Hubbard at 770-987-2291.

The 2018 Arts Competition reception will be held on Saturday, April 21, 9 a.m. at the Lou Walker Senior Center: 2538 Panola Road, Lithonia, GA 30058. The Fourth Congressional District is comprised of parts of DeKalb, Gwinnett and Newton counties and all of Rockdale County.

previousStonecrest honors CS Truck and Trailer as a Top Workplace