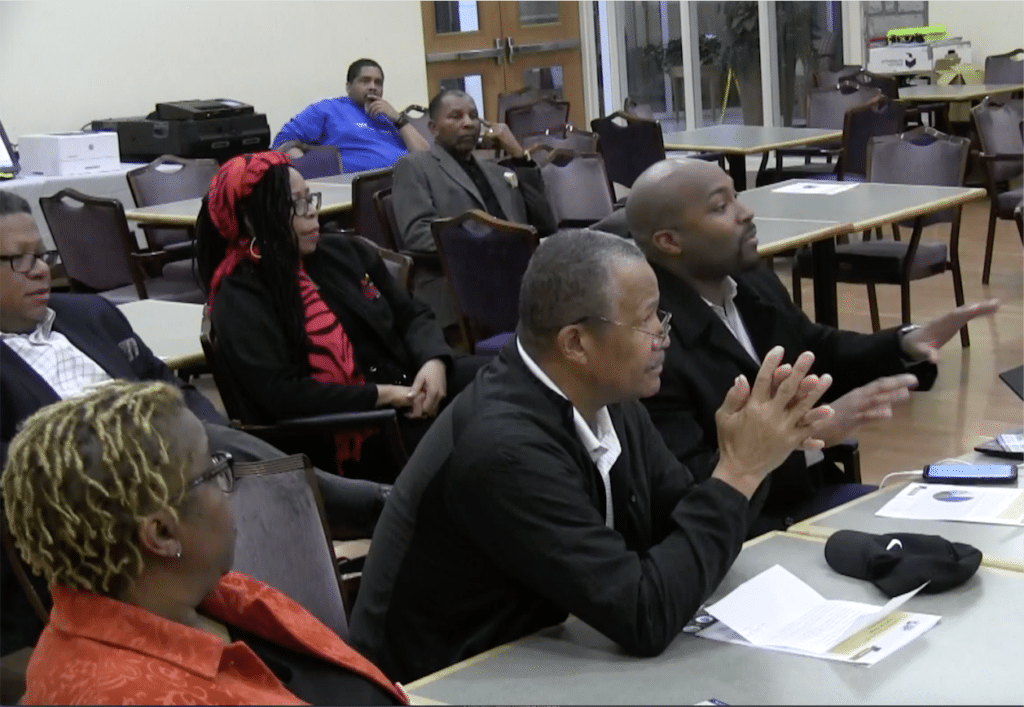 Under the proposal, the mayor would be removed from the City Council, the office of council president would be created and the council would become the governing authority of the city. The mayor would serve as a  “ceremonial head.”

The Senate Delegation faced opposition at a community meeting on March 5 with several angry citizens demanding to know why the community at large was not notified about the bill.

“I want to know why this is being shoved down our throats,” said citizen Dave Marcus, who said there has been no discussion or meeting with the community about the proposed city charter changes.

“What is the justification for you making that decision for us?” demanded citizen Chris Seabrook.

“You didn’t give us a survey. You didn’t put anything on Next Door. You didn’t send anything by mail. You’re doing the changes without consulting us,” said citizen Susan Lee.

Jones, the chief sponsor of Senate Bill 469, said “multiple constituents” and four city council members had approached him about making the change to the city’s charter, along with an amendment to provide excused absences by councilmembers from city council meetings and a provision related to elected officials forfeiting their seat. Jones said he received a resolution signed by four council members.

On Common Ground News asked Mayor Lary about the resolution.

“How is it possible for Sen. Emanuel Jones to receive a resolution without being attested by the city clerk and signed by the mayo, neither of which happened? I will be formally requesting a copy of that document from his office,” Lary said.

Lary said at the end of the day, the people will have their say.

“I feel confident that the right thing will happen, whatever that thing is,” said Lary.

Jones could not be reached at the newspaper’s deadline to discuss the resolution but he told the citizens it was important for the Senate Delegation to act.

Stonecrest resident Dele Lowman Smith said citizens should be allowed to weigh in on the matter. She said she and other citizens who did not have the benefit of creating the charter and creating the city would like to have a say in how the city is structured going forward.

“I did not personally have a conversation with any senator about it, but I know that the Stonecrest Citizens Coalition put forth a policy agenda that, a year and a half ago, was publicized that had a lot of these recommended changes,” said Smith.

Senate Bill SB 469 was filed on Feb. 28. Sen. Jones  said state representatives in the House also are putting together their own bill with changes to the city’s charter and he encouraged citizens  to reach out to both chambers and track the bills. State Rep. Vernon Jones is sponsoring the House bill.

Both, Vernon Jones and Emanuel Jones, were on theRashad Richey Show on radio station WAOK at separate times recently, weighing in on the city’s charter. The charter has been hotly debated as the city tries to seek clarity  over how missed city council meetings should be handled. The issued arose after Councilwoman Jazzmin Cobble missed two regularly scheduled city council meetings last year in a three-month period. According to the charter, failing to attend one-third of the regular city council meetings in a three-month period without being g excused by council shall result in an elected city official forfeit his or her office. The city sought clarity of the charter through a declaratory action.The city dropped the action in February, with the mayor saying he wanted the city to move forward as the delegation would take up the charter matter. DeKalb Judge Mark Anthony Scott dismissed the restraining order against Councilwoman Cobble because of a procedural filing error. The judge did not rule on the declaratory action. He said he hoped the city could find a way to work out its differences.

Meanwhile, State Rep. Doreen Carter, who attended the community meeting on March 5, said she, too, hopes the city can work through its problems with the charter. Carter is one of six members of the House Delegation who represents Stonecrest. The other House Delegation members are State Representatives Vernon Jones, Dar’shun Kendrick, Pam Stephenson, Viola Davis and Karen Bennett.

“I’ve spoken to several of my colleagues and we will be addressing the issue after Cross Over Day(March 12).  There’s a process and we have time to look at this(the city’s charter),” Carter said.

Carter, having served on Lithonia’s City Council before becoming a state lawmaker, said she wanted to carefully review any changes proposed, and she wants to hear from constituents.

“I do not believe there is a reason to disrupt the government, I need time to look through it as to whether to change the powers,” Carter said.