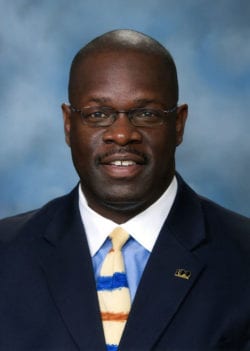 Nicholas Scott Minter, of Covington, faces misdemeanor charges for theft by taking   campaign signs belonging to Oz Nesbitt, who was in the July 26 runoff for Chairman of the Board of Commissioners.

According to a police report, Nesbitt said he witnessed Minter taking his campaign signs and several others near the intersection of Eastview and Sigman roads on Election Day. Minter reportedly placed the signs in a silver Ford pickup truck and drove off after Nesbit approached him to try and speak with him. Nesbitt said he followed Minter into Newton County until a deputy stopped them both.

Several campaign signs were located in the bed of Minter’s truck, the police report said.

Nesbitt said he was contacted recently and asked if he still wanted to pursue the case.

“I told them yes, I certainly do. I had to follow him from Rockdale into Newton County because he refused to stop. I had the Sheriff’s Office on the phone to notify them of what happened. Why he did what he did, I have no idea,” Nesbitt said. “I don’t know him at all. All I know is that I was tired and on my way home to take a shower after campaigning all day when I saw him taking my signs and others.”

Nesbitt said in a video that he made after the chase that the suspect “took me on a wild goose chase… This has been one hell of a campaign ride for me,” said Nesbitt, noting a hard-fought campaign battle against incumbent Richard Oden.

Sherri Washington, who won the Democratic primary runoff for Rockdale Board of Commissioners, Post 1, said her signs were among those in Minter’s truck. She said she was recently notified by police of what took place and asked if she wanted to go forward with prosecution.

“I said yes. Absolutely. I was very surprised that someone would take the time to maliciously take someone’s campaign signs. It’s very heartbreaking actually,” said Washington. “Those campaign signs are very expensive.”

Police said the theft is considered a misdemeanor.

“It doesn’t matter that it is a misdemeanor. When people shoplift from Wal-Mart, they are prosecuted. It doesn’t lessen the fact that you’re a victim,” Washington said.

nextAtlanta to study raising minimum wage to $15 per hour