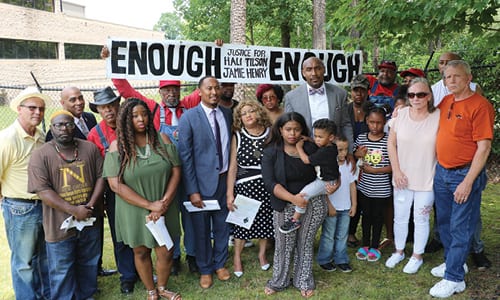 Community activists are uniting to hold a march on June 9 to demand justice for Shali Tilson and Jamie K. Henry.

Tilson, 22, and Henry, 40, died while in the custody of the Rockdale County Jail. The deaths occurred less than three months apart.

“Clearly something is going on in this jail that the citizens of Rockdale County should be alarmed and concerned about,” said Attorney Mawuli Davis, who is representing the families of Tilson and Henry.

Davis, who held a news conference outside of the Rockdale County Sheriff’s Office on May 31, called the deaths  “criminal neglect.” Tilson died of complications from severe dehydration caused by blood clots that formed in his lungs during the nine days he was locked up on misdemeanor charges. Tilson died on March 12.

Davis said Henry, who had a drug problem, died on May 26 after crying out and begging for help to no avail.

Henry was found unresponsive in her cell after being locked up for about 12 hours, according to Sheriff’s spokesperson Yolande Lovingood-Moore. The Douglasville woman was being held for Fulton County on a warrant. Lovingood-Mo0re said Henry was arrested during a traffic stop in Rockdale while authorities were on the lookout for a vehicle involved in a burglary. The GBI is conducting an autopsy, Lovingood-Moore said.

Henry’s parents, who attended the press conference, said that their daughter has a 5-year-old son.

Rockdale Sheriff Eric Levett was unavailable for comment for the news conference. Lovingood-Moore said he was on vacation.

“This is about neglect”

“These are two deaths that were absolutely preventable,” Davis said. “We believe this is about neglect, a denial of proper medical attention. “Someone is allowing sick people to die at the jail. That’s criminal.”

Davis said he expected that some immediate action would have taken place at the jail after the Georgia Bureau of Investigations released its findings on May 24 stating that Tilson had died as a result of “pulmonary thrombi due to dehydration.” Tilson also had a bruise to the front of his head, which caused hemorrhaging on the back of his brain, Davis said.

“It is our understanding (from independent medical experts) that for that level of dehydration, it would have to occur over at least a three-day period. For three days, Mr. Tilson would not have had any water, any fluids, which led to a blood clot forming in his lungs, which ultimately led to his death,” Davis said.

Activists attending the news conference said Nikie Weathersby, the officer in charge of the jail, should be fired.

Thomas Brantley Jr., president of the Rockdale NAACP, said now that the GBI has released its report, several questions must still be answered including: Why was Tilson shackled? Why was he dehydrated for so long and what does the footage from the Conyers Police body cameras show when Tilson was arrested.

“There is definitely a concern with this jail. The citizens of Rockdale County are very, very concerned and very disturbed about what is going on,” Brantley said. “…As a leader of this community, we are going to be asking the D.A. to press charges to the fullest of the law for both families.”

Tiffany Roberts, who is with the Southern Center for Human Rights, said medical care and humane treatment are basic human rights.

“In any case where a jail, which is charged with the custody of incarcerated people, fails to provide basic human rights, someone has to be held responsible… Anytime a mother has to grieve for a child for a misdemeanor offense for which he probably should have been released, someone has to be held accountable…  We shouldn’t have two deaths in the custody of one jailer in 10 years,  let alone one year, let alone three months.”

Leonard Jones, Jr., national spokesperson for the New Order National Human Rights Organization, blasted the Rockdale County Board of Commissioners for their silence concerning the two deaths. He said the three commissioners have done nothing for the families.

“It is a shame and a disgrace that these deaths have occurred at the Rockdale County Jail,” Jones said. “Nesbitt, Washington and Williams, you will not be there, if you do not get involved. It is a shame in Rockdale County that misdemeanors are turning into deaths because you have neglected to perform your duties.”

Betty Maddox Battle, founder of GRIEVE (Grieving Relatives In Every Violent Event), called Tilson’s and Henry’s deaths “horrific.” Battle’s son, Michael Anthony Maddox, was murdered in 1993, and she attended the news conference to show support for the mothers.

Nathan Knight, president of the Southern Christian Leadership Conference for DeKalb County, urged the community to unite and demand justice.

“We’re asking that the community let their voices be heard… A change must take place. The chief jailer in this system must be replaced. She needs to be replaced now. We want justice for the families,” Knight said. 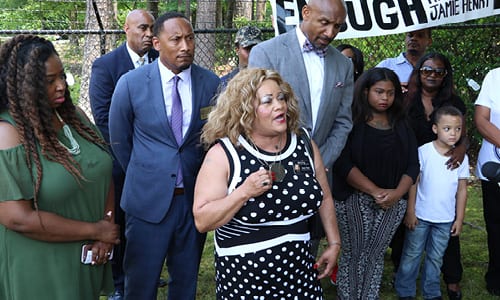 Josie Dean, who heads A Black Man Never Forgets and the Rockdale County Think Tank, said she was upset with the inaction on the part of Sheriff Levett.

“I personally called him (Sheriff Levett) when this first happened to let him know to bring it to the community, to have a press conference and talk to the citizens,” said Dean. “He said he was waiting on the paperwork. I let him wait on the paperwork. I have not heard anything else and now a second death. It’s no excuse anymore.”

Garvin Haynes, a Conyers businessman, said Rockdale citizens should be outraged and he also blamed Sheriff Levett for the deaths.

“The responsibility is not just with the jailer; it is with the sheriff,” Haynes said. “It is at the head, and we should be ashamed as citizens of this county to have this happen. It has not happened in the past.”

“If you have family members or friends in this jail house, you need to come and visit them on a regular basis until this is solved. Their life is in danger,” Haynes continued.

“I pray that these two families get the justice that they deserve, and those that are and should be held accountable are taken to the full and just limits of the law… And that someone will step up and run for office and fix this problem,” Haynes said. 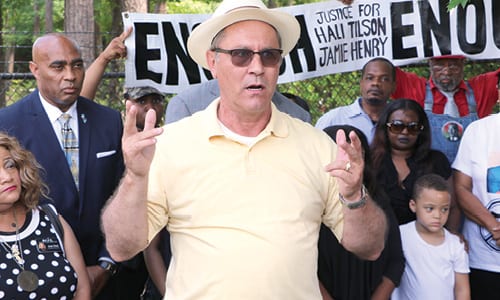 Community urged to push for changes

Donald Ferguson, who ran against Sheriff Levett in 2016, said he plans to run for the office again in 2020.  He said problems have plagued the jail, recalling that an inmate died as a result of a nose bleed.

Diamond Tilson,  Shali Tilson’s sister, called on the community’s support for the march for justice for her brother and Jamie Henry.

Amber Young, who said she was Shali Tilson’s best friend and business partner, thanked supporters who attended the news conference and called for justice for Tilson and Henry.

Attorney Davis said his hope is that the march will be a national effort. He said a group from North Carolina is planning to join the growing list of organizations that will lead the march.