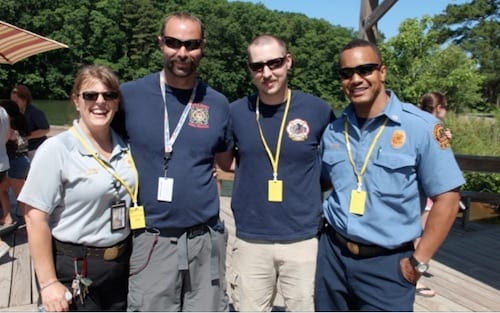 Camp OO-U-La, which began in the early 1980s and serves approximately 100 youth annually, offers young burn victims the opportunity to enjoy the great outdoors and meet other campers who share the common experience of suffering from a burn injury.

One longtime volunteer is DeKalb County Fire Rescue Capt. Shawn Staton, who has served as a camp counselor for 17 years.

“It’s hard to describe my experience at the camp in a few words,” said Staton, a 19-year DCFR veteran who supervises personnel at Station 22 in Tucker, Ga. “This place brings great memories with the return of the campers that are now counselors.”

During his time volunteering at the camp, Staton has worked as a cabin counselor, supporting counselor and lead counselor. This year, he headed up the fishing activity for the weeklong camp held at the Fort Yargo State Park in Winder, Ga.

Another DeKalb firefighter who volunteers as a camp counselor is Nicholas Ribal, who attended the burn camp as a camper.

When Ribal was 10 years old, he was severely burned on his face and arm after his brother set a gas container on fire while playing with matches.

At the completion of his treatment, Ribal received an invitation from the Georgia Firefighters Burn Foundation to attend its annual summer burn camp. The camp, which is free for Georgia youth ages 7-17, offers burn-injured children opportunities to grow in their physical and emotional recovery, forge friendships and receive peer support in a fun, safe and accepting environment.

Ribal attended the camp for 13 years and even worked there as a counselor.

“I talked to firefighters who volunteered at the camp and I liked the camaraderie they shared with each other and the campers,” Ribal said.

“I wanted to be a member of a fire department,” said Ribal, who chose to work for the DeKalb County Fire Rescue Department, the fire rescue department that started the Georgia Firefighters Burn Foundation and the summer burn camp.

nextDeKalb Police to be outfitted with body cameras