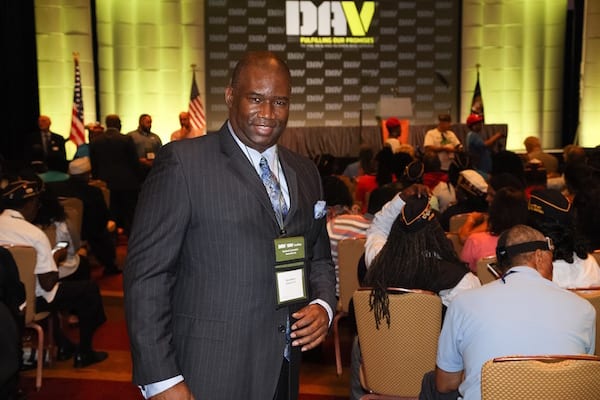 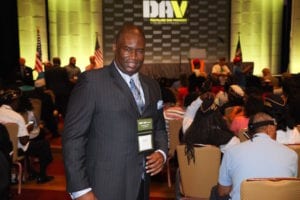 This Monday started like any other. It was 10:45 a.m. and I had an appointment to discuss my beloved program, Be Someone, Inc.  This time I was in the office of Dr. James Jones, principal of Stone Mountain High School, waiting on my 11 a.m. meeting.  Dr. Jones had a previous appointment that was running over so I pulled out my cell phone to check messages. I had to step outside to get a connection. There was Dr. Jones’ message explaining his running over meeting but I noticed a text message from Congressman Hank Johnson that got my attention!

The message was short:  “If you want to see the President address the DAV, be downtown at 11:30 a.m., Hyatt Regency.” I glanced at my watch, 11:12 a.m.  I’ll never forget the time because I instantaneously entertained several thoughts.  Could I possibly make it? What about my appointment with Dr. Jones? The President of the United States of America Barack H. Obama…! I have devoted my life to teaching young people to make the right moves, to make bold decisions.  I was now faced with one of my own.  I had to make a decision, now! I suddenly had the image in my mind of me, Orrin “Checkmate” Hudson, a product of inner-city Birmingham, Alabama shaking hands with the nation’s first African-American President.  In a heartbeat, I was in my car headed downtown and it was the best move I have ever made.

I will never forget the moment as long as I live.  First, I listened to President Obama as he addressed the Disabled American Veterans.  He said our nation needs to show its gratitude for its disabled veterans by taking care of them.  I remember feeling especially proud at that moment since I’m an Air Force veteran and I have two brothers who are disabled American veterans. President Obama seemed to be talking to me personally. He also called on local leaders to do more to help veterans, calling the nation’s commitment to its veterans a “sacred covenant.”

“I don’t use those words lightly. It’s sacred because there is no more solemn request than to ask someone to risk their life, to be ready to give their life on our behalf,” the President said. During his speech at the DAV/DAV Auxiliary’s National Convention in Atlanta, the President also said veterans have received an 85% increase in funding since his election and his administration has expedited the process of applying for benefits and support.

After the speech, I stood in line with many other veterans.  One by one, they shook President Obama’s hand.  Finally, it was my turn.  It was so noisy and there was so little time for meaningful conversation.  I thought I would challenge President Obama to a game of chess. Instead, I settled for a quick handshake and cordial greeting.  And that’s just fine. Those few seconds will last me a lifetime. I left there with a new sense of meaning and wanting to do more for our veterans.

By the way, I explained to Annie Gay, the secretary at Stone Mountain High School, that I had to leave and go hear the President’s message. I asked her to let  Dr. Jones know my dilemma. She said would reschedule our meeting soon to discuss Be Someone, Inc. and…. the day I met the President of the United States.

Orrin C. Hudson is founder of Be Someone, Inc., 949 Stephenson Road, Stone Mountain.