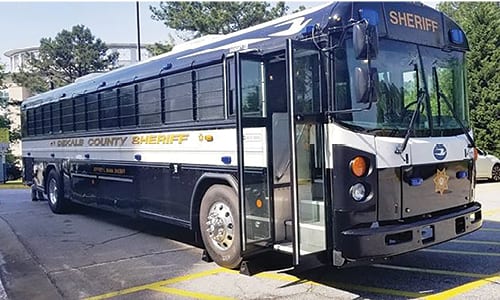 Sheriff Jeffrey L. Mann inspected the newest in the sheriff’s office fleet of vehicles on May 3, as one of two new state-of-the-art inmate full-sized transport buses rolled onto the parking lot at headquarters.  Outfitted with a host of updated features, the nearly $200,000 bus is air-conditioned, has air doors, and includes a camera monitoring system.  The rear engine-driven bus was built in Macon, Georgia by Bluebird and replaces a 2001 version. Up to 44 inmates can be transported, along with guards.  The interior features an area for keeping inmates separated when necessary.

“While mileage is a critical factor in most personal vehicle replacement, we are most concerned about the reliability of our units – which is generally a matter of age,” says Sheriff Mann.  “Once a unit reaches a certain age, it is no longer economically prudent to continue maintaining it, as parts become more expensive because they are more difficult to obtain.”

The agency’s first jail transport buses were former school buses that were purchased from the county for a dollar, a practice that was discontinued in 1996.  Today’s buses are the result of a two-year planning and manufacturing process that incorporates current transport needs, including enhanced security.  The sheriff’s office will receive another full size bus and a mini-bus, both of which will replace existing vehicles and completely update the agency’s primary inmate transportation fleet.