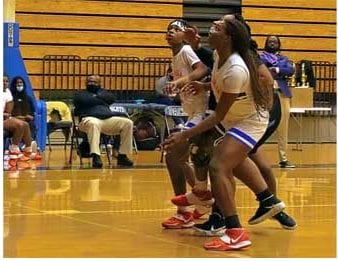 Columbia and South Atlanta were facing off for the third time this season as they took the court for the girls’ title game having split the regular season series. Columbia broke the tie on the year with a 59-48 victory for the title.

The two teams went to the free-throw line a combined 17 times in the first half with Columbia overcoming early foul trouble (10 fouls in the first quarter to build a 16-point lead twice in the second quarter only to have it evaporate late in the half.

South Atlanta’s Alexus Neal hit a three-pointer with 33 seconds left in the half to knot the game at 32-32 as the Lady Hornets pulled even after trailing 28-12 at the 5:05 mark. 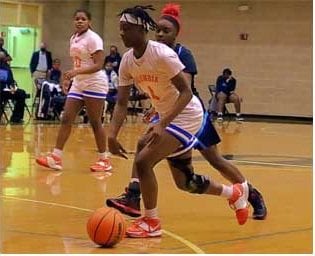 Keyonna Giles was fouled on a three-point shot and went to the line for three shots. She missed the first and hit the second to give Columbia the lead at 33-32 with 5.2 seconds left in the half. On the made free-throw South Atlanta took the ball out and Giles stole the ball and was fouled again.

In the confusion and after a conference of the referees, Giles was awarded two free throws alone at the line which she hit to make it 35-32 with 3.1 seconds remaining. Then she was sent to the line to shoot her third shot from the earlier foul and missed and the clock ran out.

Kamiya Kennedy, who had three first half fouls, extended the lead to open the second half assisted with a pass underneath from Giles to make it 37-32. Shortly after that play, Mic’Kayla Spivey and Kennedy both picked up their fourth fouls.

South Atlanta took advantage of the situation to pull within 37-36 with 6:12 left in the quarter. Columbia responded with a 9-3 run led by five points by India Terrell and grabbed a 46-39 lead as Kennedy got down the baseline with 24 seconds remaining for floater that rattled home.

Terrell scored twice on layups, one on an assist from Tekierah Jones, to give the Eagles (16-7) a 50-39 advantage.

Columbia finished the game on a 9-2 run with Kennedy benefitting from a pair of excellent passes into the post from Giles to help close out the win.

India Terrell finished the night with a game-high 30 rebounds while pulling down 9 rebounds to lead the Eagles. Kamiya Kennedy finished with 14 points and 7 rebounds to aid the cause.

Brianna Anderson finished with 18 points to lead South Atlanta while Kashay Bass picked up a double-double of 16 points and 12 rebounds.

Columbia is set to host the Region 8-2A consolation game loser between Gordon Central and Chattooga next week.

A slow start turned into a convincing 67-48 victory for the Columbia Eagles over KIPP to sew up the No. 3 seed for Region 6-2A heading into next week’s state playoffs.

KIPP got out to an early 8-0 lead behind Malachi Harris (5 points) and a three-point play by Croix Leduff. Columbia answered back behind Mason Lockhart and Kawasiki Ricks with four points each as part of a 10-2 run to tie the game 13-13 at the end of the first quarter.

Two treys by Abdur Rabbani and a third by Jalen Pugh and KIPP was back in front 24-17 lest than three minutes into the second quarter.

Columbia answered the bell with a 14-0 run led by Rashad Headges and Julius Coleman. The pair both hit a three-pointer and another basket to go with four points from Lockhart to jump out to a 31-24 lead. The Eagles took a 38-30 lead into the half on a second Coleman three and would never trail again.

The Eagles (17-6) put together a 10-0 run during a three-minute span of the third period again on the backs of Coleman (5 points) and Headges (three-pointer) to push ahead 49-32. A three-pointer by Kenneth Hardaway with three seconds on the clock sent the Eagles into the fourth quarter with a commanding 52-36 advantage.

Another run, this time 8-0, to open up the final quarter got started by Headges with a tip-in under the basket and a pair of baskets from Julius Lymon to extend the advantage to 60-36.

Julius Coleman had 16 points to lead all-scorers and was joined in double figures by Mason Lockhart 14 points, 8 rebounds; Rashad Headges 15 points and Kawasiki Ricks with 10 pints and 6 rebounds.

Kaulin Reynolds had 14 points to lead KIPP (9-13) and Malachi Harris chipped in 10 points.

Columbia opens the Class 2A playoffs with a road trip to Summerville to face Chattooga (17-3), the Region 7-2A runner-up on Tuesday at 7:30 pm.

The Redan Lady Raiders dropped their second consecutive game in the Region 5-3A girls’ tournament via a 45-27 decision to Sandy Creek on Friday at Greater Atlanta Christian.

The loss puts Redan (10-8) as the No. 4 seed on the road next week to face the winner of the Stephens County/East Jackson Region 8-2A championship game.

nextDeKalb to close applications for rental assistance due to overwhelming response