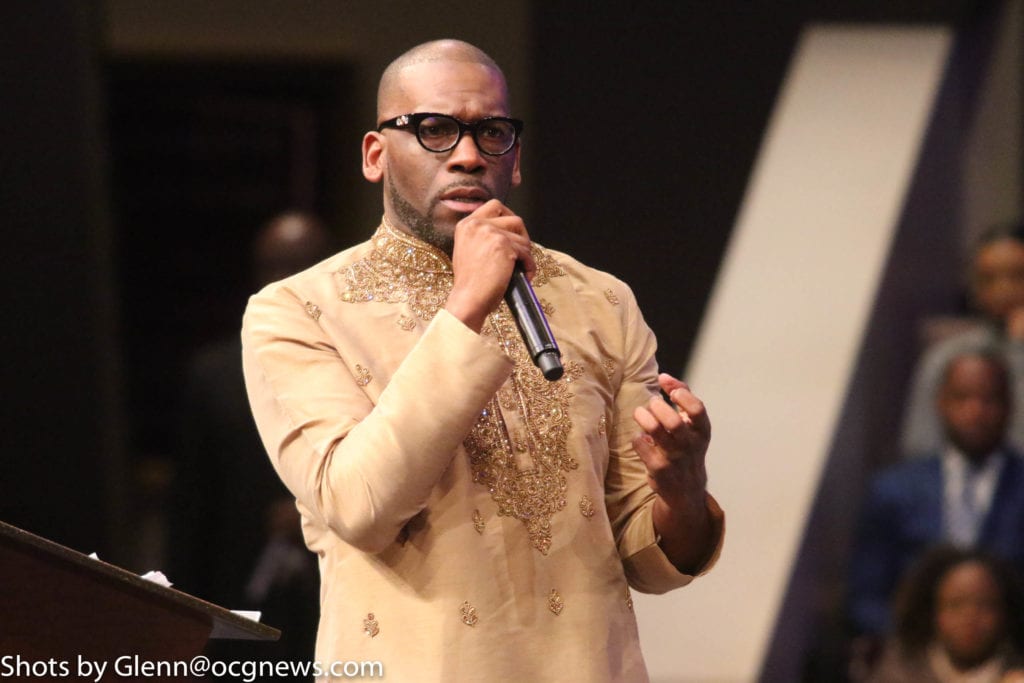 Bryant took the helm, igniting the crowd with a sermon entitled “Bite Me” in which he rebuked enemies—snakes—who try to tear down others. He invited those who had left New Birth out of despair to return, along with those seeking a church home where they can grow and become involved in ministry and the community.

“I need New Birth to get the word out to everyone that our church is back on fire,” said Bryant.

Atlanta businessman Thomas W. Dortch, Jr., chairman of New Birth’s board of directors, said the sermon was just what New Birth needed to beginning rebuilding. Dortch and other church leaders say the death of Bishop Eddie Long, the longtime pastor of New Birth, and the transition following his death took a toll on the congregation with many leaving. Long died of cancer in January 2017.

“Dr. Bryant did a phenomenal job. His message resonated with every genre—young people, middle-aged people, seniors, those who left and those who have returned to New Birth,” Dortch said. “New Birth is ready to regain its place in the community again, to take ministry to the people, and Dr. Bryant is the person to carry out that vision.”

Dortch said Bryant, 47, was selected after an extensive search that included a pool of 138 applicants.

“We felt he was the one who not only had the ability to minister but the vision to lead and grow the church,” Dortch said. “A church has to be one that ministers and addresses the issues, if New Birth is going to grow.”

Dortch said that Bryant has a plan to address the church’s debt—about $31 million—and social issues. Bryant has set both, short and long-term goals, and he plans to use his national and international network, along with local resources to help meet those goals.

Bryant founded the Empowerment Temple Church in Baltimore in 2000 with 43 people and grew the congregation to 12,000 members, making it the fastest-growing church in the history of the AME church.

Dortch said Bryant plans to meet with leaders and constituents in the community to learn how the church can work collaboratively.

DeKalb County CEO Michael Thurmond, Bryant’s mother, the Rev. Cecelia Williams Bryant, and his sister, Dr. Thema Bryant-Davis, a professor at Pepperdine University, and members of Kappa Alpha Psi were among the guests who attended Bryant’s initial sermon as pastor of New Birth.