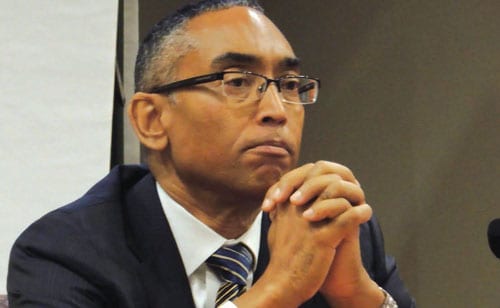 DeKalb CEO Burrell Ellis hugged his wife in an emotional embrace after the Georgia Supreme Court handed down its decision on his appeal on Nov. 30. The high court unanimously overturned his conviction, citing “technical errors” that occurred during his trial.

The court said in a 30-page opinion that while there was sufficient evidence to find Ellis guilty of perjury and attempt to commit theft by extortion, “we must nevertheless reverse Ellis’ convictions based on certain evidentiary errors that occurred at his trial. Accordingly, we affirm in part and reverse in part to allow for a retrial on the charges of criminal attempt to commit theft by extortion and perjury.”

Attorney Dwight Thomas, who served as an advisor to the team representing Ellis, called the decision “rare” and a blessing.” He said the reversal means Ellis, who is ae as a real estate attorney, will have his license, which was suspended, restored and he remains the CEO of DeKalb County until Dec. 31. Lee May has been serving as Interim CEO and Michael Thurmond was elected on Nov. 8 to take the helms on Jan. 1.

“Had this appeal been unfavorable to him then he would not be the CEO. But he is in fact the CEO,” Thomas said. “Essentially, every justice of the Georgia Supreme Court—all seven of them—said he (Ellis) was denied a fair trial and his conviction should be reversed. It is rare that the Georgia Supreme Court reverses a criminal conviction,” said Thomas. “He (Ellis) and his wife embraced. He was very grateful and he showed strong faith. It was a blessing, a very emotional moment.”

At a news conference held on Dec. 1, Ellis thanked supporters who have stood by him.

Thomas said the District Attorney has until Dec. 5 to file a motion to retry the case again. Ellis’ first trial ended in a mistrial on Oct. 21, 2014 after a jury could not reach a unanimous verdict. The state retried Ellis on June 1, 2015 and he was found guilty of one count of attempt to commit theft by extortion and three perjury accounts. Ellis was sentenced 18 months to serve in prison, but was released from prison on March 1, 2016 after serving eight moths.

“I’m hoping that reason prevails with the people who have the responsibility to make the call as to whether he should be retried. It’s time for this to be finished and I’m hoping the honorable thing will be done,” Thomas said. “The District Attorney has the power to make the decision through Dec. 31.”

DeKalb District Attorney Robert James, who spoke exclusively with On Common Ground News, said while he was disappointed with the Supreme Court’s decision, he respects the ruling. He said it should be noted the high court did find sufficiency in the evidence that was presented at the trial. James further stated that although his office is assessing whether to file a motion for reconsideration, the decision is not his to make on whether the case should be retried.

“By the time the case gets back in DeKalb County, there will be another District Attorney sitting in the office,” said James.

Newly-elected DeKalb District Sherry Boston has refrained from commenting on the case.

The high court said the trial judge made a “harmful error” in allowing a Special Purpose Grand juror to testify at Ellis’ trial in an effort to prove that Ellis made false statements that were key to the grand jury’s investigation. Whether a false statement was key, however, “is normally an issue for the jury,” the Court said. “… This was inappropriate.”

The court also said the trial court committed a reversible error by prohibiting Ellis from presenting any evidence of his interactions with several other vendors who were not named in the indictment.

“Basically, he did not get a fair trial. He did not have the legal opportunity to present evidence that was favorable to him. Had he been allowed to present that evidence, he would not have been convicted,” said Thomas.

Ellis was accused of trying to pressure a county contractor for campaign contributions. His first trial ended in a mistrial on Oct. 21, 2014 after a jury could not reach a unanimous verdict. The State retried Ellis on June 1, 2015 and he was found guilty of one count of attempt to commit theft by extortion and three perjury accounts. On July 8, 2015, Ellis was sentenced 18 months to serve, but was released from prison on March 1, 2016.

“The county attorney has advised that Mr. Ellis’ appeal to the Georgia Supreme Court is not final until the time passes for motions for reconsideration, which could be filed by either party.

The Georgia Supreme Court has ordered that such motions must be filed by Dec. 5, 2016. During this interim period, the county attorney is evaluating the effect of the Supreme Court’s order in the event that no reconsideration motions are filed or the Supreme Court denies motions filed by either or both parties.”