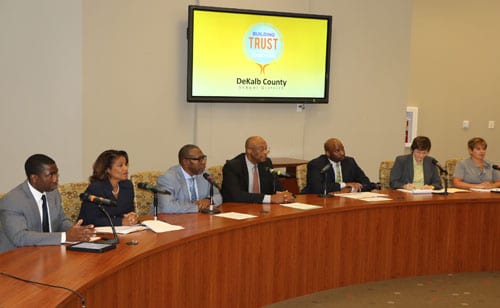 Parents will be receiving letters in the mail in the coming months regarding an extensive lead testing initiative being conducted at over 150 DeKalb County schools and facilities.

In a news conference on Sept. 13, DeKalb County School District (DCSD) Superintendent Dr. Stephen Green, joined by the Director of DeKalb County Board of Health Dr. Elizabeth Ford and DeKalb County Interim CEO Lee May announced plans to test the schools’ water supply for lead starting Sept. 20. The testing will be completed by Summer 2017.

District officials said there is no evidence of water quality issues and that the inspection is being conducted as a cautionary measure.

“We made a decision to take a proactive stance to ensure our water is safe for consumption,” said Green.

The school district’s decision to conduct lead testing follows recent reports of elevated lead levels found in over half of Atlanta Public Schools last spring. APS tested school facilities after Flint, Michigan gained national attention after a state of emergency was declared after water sources were found to have high levels of toxicity.

Due to an aging water system, dozens of school districts across the nation have started testing after dangerous levels have been discovered in other cities such as Portland, Chicago, Newark, and Washington, D.C.

The drinking water testing in DeKalb’s school district will sample all main water meters supplying buildings, kitchens, water fountains, bathroom sinks, ice machines, water sources in teacher lounges and athletic fields. Each location will be sampled twice to ensure EPA compliancy. School district officials stated that water sources will be disconnected should lead exposure be found. Students and faculty will be provided bottled water until the problem has been resolved.

“If there is lead detected, then we’ll certainly be acting on that. It’s a matter of exposure, age…there’s a lot of factors that would determine how much risk there is,” said Dr. Ford, who is also a pediatrician.

Environmental Protection Agency guidelines require action be taken if a sample indicates lead levels greater than 15 parts per billion. According to the EPA, however, there is no safe level of lead in drinking water. The American Academy of Pediatrics recommends that school water fountains not exceed lead concentrations of 1 part per billion.

The CDC says even low levels of lead in children’s blood can result in behavior and learning problems, lower IQ, slowed growth and other issues.

No federal or Georgia law requires water in schools or daycare centers to be tested for lead. Atlanta is the only metro-area school district to test school drinking water system-wide.

Atlanta Environmental Management, Inc. has been contracted to conduct the testing. Testing results will be made available online at www.dekalbschoolsga.org/lead-testing. Parents will also receive testing results via letters from their children’s schools.