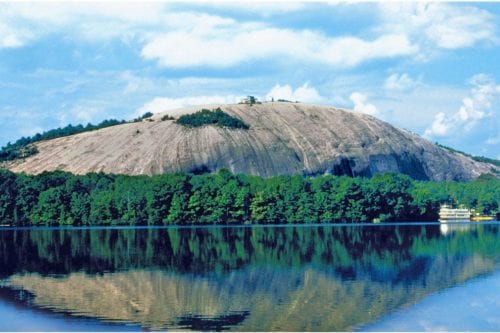 Today, the Confederate carving on Stone Mountain is rebranded with lasers, animated with colored beams of lights to glorify the image as if it is coming back to life.

I do not seek to destroy history but to tell the true story.  The defenders seek to rebrand the symbolism of oppression and terrorism as art and history.  The Confederates States of America sought to spread slavery and wanted to continue it in its Constitution.  The carving on Stone Mountain is a legacy of the KKK and the United Daughters of the Confederacy.   The moment the statues and monuments were created, the lie was told.  It is not history.

Some say let it be, why make trouble? Just accept things as they are. I dream in color and I reject history that excludes my story. There are those that look at things the way they are, and ask why? I dream of things that never were, and ask why not?’

During the fifties and sixties, Dr. King was advised to slow down, and not push too hard or fast. His response: “We have also come to this hallowed spot to remind America of the fierce urgency of Now. This is no time to engage in the luxury of cooling off or to take the tranquilizing drug of gradualism.” (Martin Luther King, Jr., “I Have a Dream”, August 28, 1963.)

Fifty years later, some are still struggling for economic and civil rights. When you’re near the bottom or in the minority, you are told often to take a slow and gradual approach, change takes time. However, if you are in the majority or position of power then a fast-track approach is often taken, force is used or the rules are defied to achieve the desired outcome.