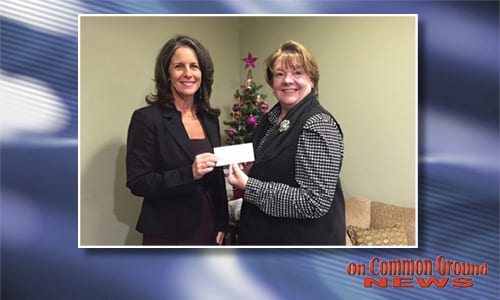 Bills, who serves as chair of the Rockdale County Task Force Against Family Violence, said the donation is the result of the 9th Annual Race Against Violence (RAV) fundraiser, held in October. Nearly 300 runners, along with 64 sponsors, supported the event.

Stevenson thanked Judge Bills for the donation, saying the annual race helps Project Renewal with expenses that are not normally covered by grants.

This year’s event brings the total raised from nine races to approximately $125,000 with more than $85,000 being donated to the shelter.

Judge Bills also thanked supporters. She said the event epitomizes the community’s efforts in giving back.  The RAV continues to the premier road race in the area due to the organization and the fast, flat course being a Peachtree Road Race qualifier.

Plans for next year’s race are already in motion since it will be the 10th Anniversary for the RAV.

For more information about the RAV,  visit rockdaleaware.com or contact Derek Marchman at 678-938-5799.