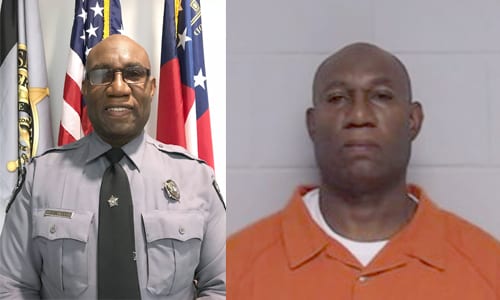 Rockdale County Deputy James Patrick Campbell was terminated on Monday after two more women, including a 17-year-old, came forward and accused him of stalking, the Rockdale Sheriff’s Office said today.

“This behavior is definitely not reflective of this agency and will not be tolerated,” Sheriff Eric Levett said in a statement.

Campbell had been on paid administrative leave since he was arrested on May 27 on the first stalking charges involving a woman and her daughter.

The initial complaint against Campbell was filed on May 19 with the Office of Professional Standards. An internal affairs investigation was turned over to the criminal investigation division and Campbell was arrested and charged with stalking, Sheriff’s spokesperson Yolande Lovingood-Moore said.

According to the arrest warrant obtained by On Common Ground News, Campbell went to the women’s home and partially blocked their driveway after receiving a text message on May 6 for him “to no longer make contact with her or her daughter.”  A second text was sent on May 9 after Campbell returned to their home again. The warrant said the women “felt intimidated due to James Campbell’s status as a law enforcement officer.”

Campbell was hired by the Sheriff’s Office in 2016. He had a history of disciplinary actions for citizen complains, code of conduct and emergency vehicle policy violations, according to his personnel file,   Channel 2 News reported.