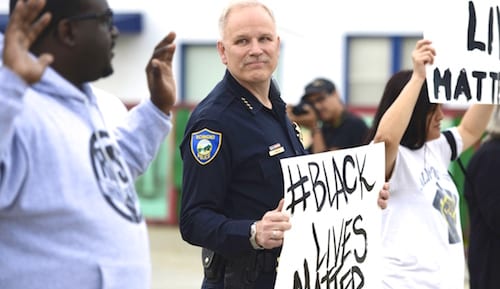 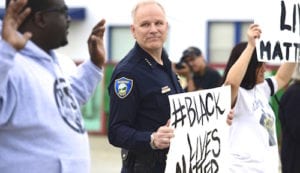 Dozens of Rockdale County citizens and law enforcement officials came together for a town hall meeting on July 12 seeking solutions following two fatal officer-involved shootings of African American men, one in Baton Rouge, LA., the other in Falcon Heights, Minnesota. Those shootings sparked the ambush retaliation murders of five police officers in Dallas, Texas, touching off even more rallies and cries for peace around the nation and town hall meetings like the one in Rockdale.

Rockdale Chairman Richard Oden called the meeting in an effort to encourage dialogue between the community and government officials to discuss positive solutions for community-oriented policing.

“I believe the community needs to know we care and are just as concerned about the safety and unity of citizens and officers, in addition to keeping our streets and residents safe from crime,” said Oden.

“There’s a lot of training that is needed. We have done training in diversity, but I cannot tell you how many calls we get where someone has an emotional or mental health issue,” said Wilson.

Wilson also said that a report detailing the race and other demographic information of citizens at traffic stops is provided at weekly meetings to curtail racial profiling.

“My heart goes out to the Dallas police officers that lost their lives, the (Dallas) Chief of Police and the families who lost their loved ones,’ said Levett.

The sheriff stated that while he does not condone the behavior of the officers involved in the recent police encounters that left two men dead, he is seeking the community’s support to restore trust between law enforcement and the public.

Levett said that his department offers a variety of programs aimed at improving community/police relations including the junior cadet program, the citizen’s police academy where citizens can learn about law enforcement and even a firearms class. Levett also announced the department’s newest hiring initiative geared toward recruiting well-qualified young people entitled, “For the change, be the change.”

“This may be a profession that you never thought you would be in. If you want to make that change, we’re asking you to be that change,” said Levett. “If you want justice, if you want peace, join the police department.”

The town hall panel was followed by a Q and A led by community members seeking solutions and understanding. To view the community discussion, visit On Common Ground News’ Facebook page.