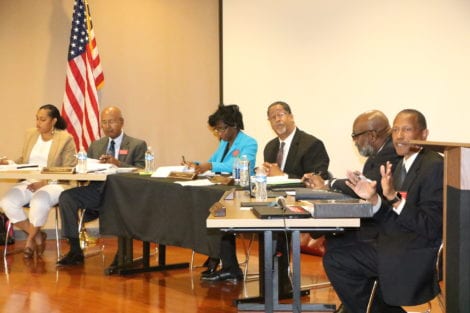 The Stonecrest City Council has hired a firm to temporarily handle city personnel and another company to help secure a site for City Hall as the new municipality takes shape.

Mayor Jason Lary said the city should realize some revenues at the end of August that will come from franchise fees for various entities thanks to pre-work that was done by the Stonecrest City Alliance Vice Chair Plez Joyner. Lary said property tax revenues are expected for the first quarter in 2018.

“In the interim, I am interviewing organizations that can handle Tax Anticipation Notes (TAN),” said Lary.

Lary said the City of South Fulton’s Governor’s Commission set up a TAN and the city started off with $2 million in its coffers.

“We can’t wait until the money comes in. We have to be prepared to handle business licenses and other city business and we can’t do that without having the people in place,” Lary said. “I’m getting a lot of calls from people inquiring about all sorts of things.

The City Council on May 15 approved CH2M as the city’s contractor to oversee the city’s personnel and infrastructure. The firm was one of two to present its credentials at the council’s May 10 work session, which was held after the first City Council meeting on May 1. CH2M touted its experienced leadership and history in overseeing municipal infrastructure. The IBTS (Institute for Building Technology Safety) also made a presentation.

The council confirmed an ordinance establishing the position of Clerk of the Municipal Court. Attorney Thompson Kurrie, Jr. of the law firm of Coleman Talley recommended establishing the position, saying that the city of Stonecrest (population 50,000) should have its own Municipal Court Clerk rather than relying strictly on the City Clerk to handle court duties in addition to regular administration duties.

The council also voted unanimously to approve T. Dallas Smith Corporation to represent the city regarding its City Hall space. The council is considering three sites located within the city of Stonecrest and will work closely with the firm on the lease and other aspects of the negotiations.

The council deferred action on purchasing equipment for themselves and the mayor. The council said it would have a discussion with CH2M about specific items, costs and contracts that might be needed for equipment such as microphones, cell phones and laptop and computers.

The council also deferred voting on an ordinance establishing the city’s policy and oversight committees as well as the citizen advisory committees, saying it needed more time to consider leadership roles and responsibilities.

The council approved authorization to execute necessary documents for liability insurance coverage for the council and mayor.

The City Council passed an ordinance to amend its meeting times beginning in June through the end of 2017. The council will meet on the first and third Mondays, 10 a.m., at the Stonecrest Library, unless the meetings fall on a holiday or pose a scheduling conflict for the library. The council’s work sessions will be held on the first and third Wednesdays of the month at 5 p.m. at the library also, unless deemed necessary to schedule at another time or date.

Two additional work sessions are scheduled this month: May 24 and May 31.

The next City Council meeting will be held on Monday, June 5, 10 a.m.