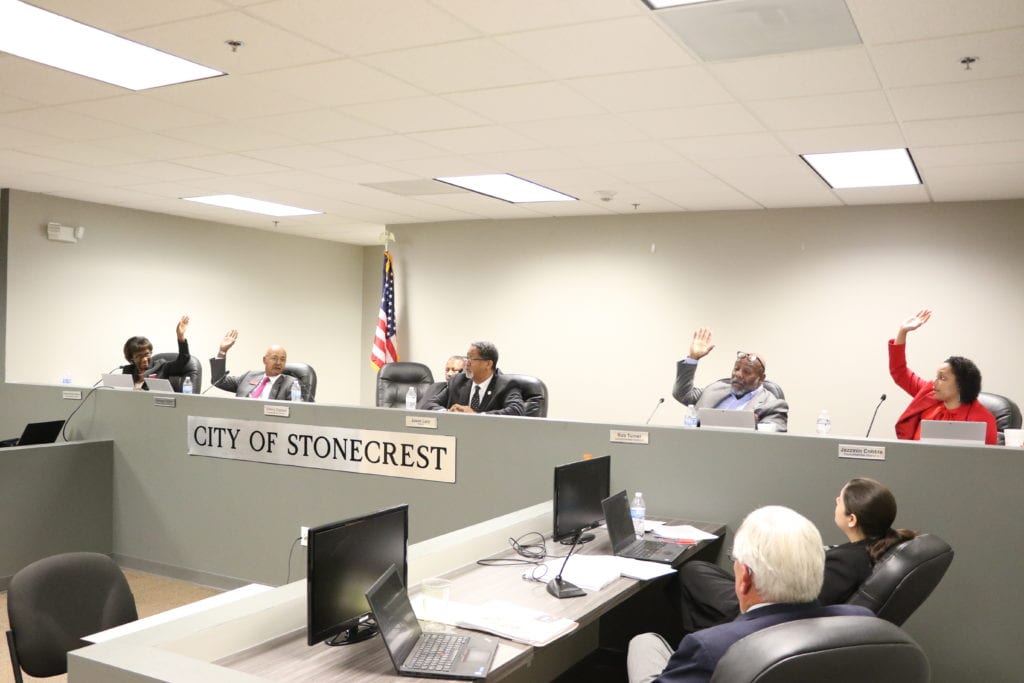 The Stonecrest City Council voted 4-2 to continue contract negotiations for the city’s SPLOST program management with Grice Consulting Group. The company has been in limbo with the city since last fall when city staff members questioned the “high” costs and scope of services that Grice billed the city for pre-SPLOST work.

City Councilwoman Diane Adoma, who made the motion at the April 21 City Council meeting to renew negotiations with Grice, said council members wanted to act in good faith in honoring the contract. The council approved the motion after a heated, lengthy debate.

The agreement, which Adoma said is worth at least $2 million, is the first substantial opportunity the city has awarded to an African-American-owned firm. The council’s decision to retain Grice came after public criticism that the city had awarded a multi-million contact to CH2M to oversee the management of the new city without seeking out an African American firm. CH2M, whose top officials are white, was selected because it is among the largest companies  in the nation that specialize in setting up new cities, city officials said.

Adoma said she made the motion to continue working with Grice after getting a legal opinion from City Attorney Tom Kurrie. She said she wanted to avoid any legal action that might come from Grice’s CEO, John Funny.

“His attorney (John Funny) was sending letters to us. We were trying to find a way to work with them,” Adoma said. “If it was a bad contract, it should have come back to the Council—not the city manager, assistant city manager and the mayor just taking things into their own hands…. What has happened now is that the contract process can begin. It’s really saving ourselves from ourselves.”

Funny said in an e-mail he sent to City Manager Michael Harris and forwarded to On Common Ground News that he is looking forward to working on the project.

“I’m looking forward to working with the City on this effort.  I’m excited about the opportunity to assist the City of Stonecrest with managing its SPLOST initiatives,” Funny stated in the e-mail dated May 22.

Relationship with Grice deteriorated after billing

Grice and city officials had been at odds for months. The relationship soured shortly after the council voted unanimously to retain Grice on Aug. 21, 2017. Ten days after the council’s vote, Grice invoiced the city $56,840 and then sent a second invoice for an additional $54,840, Mayor Jason Lary said. Grice invoiced the city a total of $162,000 through November 2017, including $20,000 for setting up and conducting SPLOST community meetings, Lary said.

City Manager Harris said things came to a “pause” after receiving the initial invoice. He said the invoice did not match up with the amount of work stated for the three-month period.

“That was the point at which I felt we needed to stop and reconcile this before going any further,” Harris said.

Harris, other staff members and Kurrie worked to negotiate a payment of $40,000 to Grice for the work performed. The company accepted the payment, city officials said.

Councilmembers Rob Turner and Jazzmin Cobble said City Attorney Kurrie and staff members should have brought the matter back to the City Council, rather than negotiate the $40,000 payment to Grice

“This was done without our knowledge and then we’re looking like “What’s going on here?’” said Rob Turner. “If we made the decision to choose a company like Grice, why didn’t you come to us to make changes or alterations when it was time to do that?”

Said Cobble: “You never came back to council and said ‘Here is where we are.’ Decisions were made after that and that, and we were caught up on the back end.”

Mayor Lary said city officials were shocked when they received the invoices from Grice. They asked for supporting documents for the work, but did not receive substantive evidence.

Lary blasted the council for its decision to continue working with Grice, rather than to approve a Request for Qualifications (RFQ) to find another company to manage the SPLOST program.

“It smells to high hell to me. I don’t understand why we are steering this down one street,” said Lary. “The whole thing is so shady. Why wouldn’t we put it out for RFQ)?”

Councilmember Jimmy Clanton, who voted with the mayor against the motion to continue negotiations with Grice, said he failed to see how the city was moving forward by going back to the table to give Grice another try. He said the city had no obligation to automatically give Grice a contract because it was his understanding the council’s vote was to negotiate a contract with Grice.

“What if we don’t reach an agreement” Clanton said. “We agreed to negotiate with Grice. We never agreed to hire them.”

Citizen Dave Marcus, who frequently attends the city’s council and zoning meetings, lashed out at the council during public comments near the evening.

“Well, children, that was an enlightening debate on Grice. It’s been a year since you’ve been in office. I suggest you figure out who the city attorney reports to. I suggest you figure out the history of whether you have a contract with Grice or not. And I suggest that before you start spending $3 or $4 million of our tax money that you have an RFQ and an RFP. That’s all. Mr. Mayor, thank you for your objection to this process. Councilman Clanton, I believe you also voted with the mayor, thank you. The rest of you: I’m disgusted.”

previousWhere the Candidates will be on Election Night