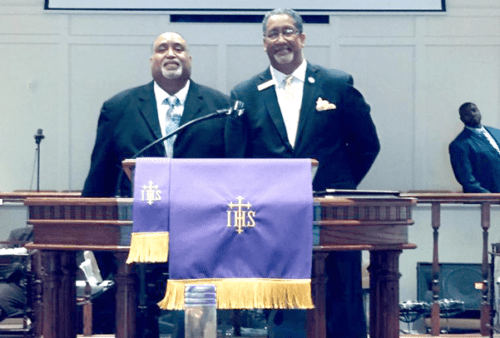 Stonecrest Mayor Jason Lary is pictured with his brother, the Rev. James Lary, where he preached on Palm Sunday at Union Grove Missionary Baptist Church in Lithonia.

Stonecrest Mayor Jason Lary is getting a firsthand education on stroke since his 58-year-old brother, the Rev. James Lary, had a stroke on April 15. Their family, he said, is keeping vigil as their loved one recovers.

The mayor said his brother moved from the Intensive Care Unit to a regular hospital bed on April 18. He has a tube inserted into his esophagus because the stroke impacted his ability to swallow, Lary said.

Lary said his brother had come from Macon, Georgia to preach the Palm Sunday worship service at Union Missionary Baptist Church in Lithonia, where the mayor serves as a deacon.

“It was a great worship service. I had the opportunity to introduce him. Growing up, he was literally my big brother. I was scrawny and he was a big guy who could lift the back of a Chevrolet. He was my protector. On Sunday, he preached about how you can’t stop the unstoppable and accepting God’s will. The next day, he had a stroke,” said Lary, who said he and his brother are only one year apart. Rev. James Lary is the eldest, followed by Jason Lary and four other siblings.

“It (the stroke) came from out of the blue. My brother had dropped his granddaughter off at school and had to pull over because he didn’t feel well. He said his vision was blurred and he felt dizzy. He took two aspirins and called 911. Paramedics came and rushed him to the hospital.”

Lary said his brother is recovering “slowly but consistently.”

The mayor, who completed treatment for prostate cancer in December, said he is doing his part to help his brother maintain a positive attitude. Lary said he knows personally that having the support of family is critical because that was the key in his own recovery. He said he is looking forward to sharing his medical journey in an interview with On Common Ground News.

“Any treatment of illness has limited effect without family support. I was able to power through my treatment without taking any time off because of the support of my wife and kids. Half the battle of any illness is mental support,” said Mayor Lary.

Lee May, former DeKalb CEO who is now a pastor, says he also knows personally that family support is critical during medical emergencies. May’s 37-year-old sister had a stroke in December. She has since recovered to full physical capacity, May said, and is back to running her trucking business.

“My sister suffered a major stroke. No one expected it. Her recovery is the closest thing to a real-life physical miracle that I have ever experienced. I praise God for her recovery,” said Lee.

African-Americans are more impacted by stroke than any other racial group within the American population. According to the National Stroke Association, blacks are twice as likely to die from stroke as whites. Some of the risk factors as major reasons for strokes among blacks include: Diabetes; smoking; obesity and high blood pressure.