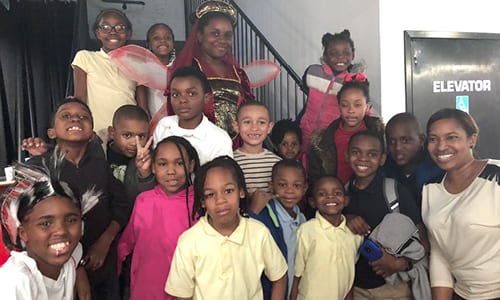 Twenty children who attend the after-school program at Lucious Sanders Recreation Center in Lithonia recently had the opportunity to attend the stage drama, “Cobweb Dreams.” What made the outing so special? The kids got to see the Champion Middle School Drama Club perform the play at the ART Station in downtown Stone Mountain, thanks to the South DeKalb Rotary Club.

The Drama Club, under the direction of Drama Instructor Rwanda J. Hammond, performed “Cobweb Dreams, which was written by playwright Lindsey Price who sets the fun-filled fantasy that runs parallel to the events of Shakespeare’s A Midsummer Night’s Dream.

“It was my pleasure to support Champion Middle School’s Drama Club again this year,” said Gaiters. “They are a very well-organized and talented group of students. Hopefully, some other organizations will sponsor some youths in the future for performing arts programs like these.”