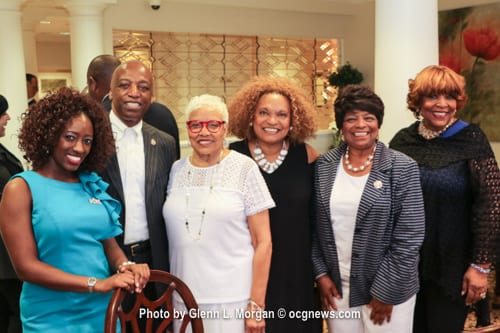 The Georgia Black Legislative Caucus kicked off its 2018 conference, “Let Freedom Ring,” with a fiery AME preacher who served as the event’s first keynote speaker. The two-day conference, Aug. 10-11, was held at the Allen Entrepreneurial Institute, located in the new city of Stonecrest.

Bishop Reginald T. Jackson, Presiding Prelate Sixth Episcopal District of the African Methodist Episcopal Church, told attendees that black voters have the power to be the game changer when they go to the polls in November. Bishop Jackson laid out the groundwork needed not only to elect Georgia’s first Democratic governor in decades, but for every candidate the GLBC wants all the way down the ballot in the upcoming general election.

Said Bishop Jackson: “Everywhere I go people ask me: Well, do you think she can win in Georgia?” said Jackson, referring to Stacey Abrams, who is making a bid to become the nation’s first African American governor. “They act like it’s impossible and the first thing I do is remind them that we’ve got more than one black woman running statewide in Georgia. We got a black running for superintendent of schools. We got a black running for state insurance commissioner. And yes, all of them can win!”

Bishop Jackson made his remarks during the Eugene Tillman Prayer Breakfast, named for the first African American elected to the Georgia General Assembly after Reconstruction. The late Tillman served 16 years representing the Savannah area. Tillman, who was also a pastor, passed away in July 2009.

Bishop Jackson set the tone for the conference, encouraging empowerment and unity throughout the community, including among church leaders.

A sold-out crowd attended the luncheon, where DeKalb County CEO Michael Thurmond served as the keynote speaker. Thurmond discussed the importance of unity.

“When I was in the caucus, we spent a whole lot of time arguing over ‘or’ and not  enough time focused on ‘and,’” Thurmond said. “…The Democratic Party is often split: Should we be focused on turning out the base or should we reach out and get the moderates and independents? You gotta’ do both,” he explained, saying that one must understand the power of “and” as a conjunction.

State Rep. Billy Mitchell, who served as conference committee chairman, said the GLBC was pleased with the turnout for the conference.  Georgia legislators, elected officials, business professionals, community leaders and others came to hear the keynote addresses as well as to attend a host of panel discussions and the opportunity to network. Mitchell said 41 of the 60 members of the caucus attend one or more events during the conference.

“The conference was an overwhelming success. It was very well attended,” said Mitchell.  “The weekend is one where we come together to discuss policies and efforts to support collectively. We heard from many advocates speaking on a variety of issues—from gun control to expanding Medicaid. We will take these positions and develop policies that we will support as a group in the coming year.”

More photos from the event at www.ocgnews.com.