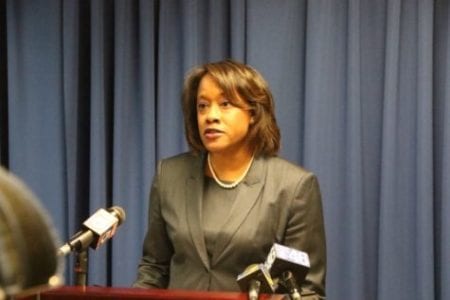 There will be no retrial in the Burrell Ellis case. DeKalb County District Attorney Sherry Boston announced at a Feb. 6 press conference that she had signed the order to dismiss the case against the former DeKalb CEO. She said she reviewed the case and there was no need for a retrial. Superior Court Judge Courtney Johnson granted Boston’s request to dismiss the case.

Attorney Dwight Thomas, part of Ellis’ legal team, said that Boston “did the right thing. She did the honorable thing. It’s finally over.”

The decision is one that Ellis had been waiting for since the Georgia Supreme Court unanimously overturned his conviction on Nov. 30. The high court said Ellis wasn’t given a fair trial because testimony that could have helped clear him was prohibited. Ellis maintained his innocence throughout the ordeal.

Ellis was reinstated and returned to office for a few weeks in December, just ahead of Michael Thurmond’s January installation as DeKalb’s new CEO.

Ellis had been suspended from office since July 2013 after facing criminal charges for allegedly trying to extort campaign contributions from county vendors.

Ellis had two trials, the first ending in a hung jury in 2014. Ellis was retried and found guilty in 2015 of attempted extortion and perjury. Ellis served eight months in prison and appealed his sentence to the Georgia Supreme Court.

After the high court overturned Ellis’ conviction, Robert James, who was leaving office as DeKalb’s D.A., said he would not decide if Ellis should be retried. He said the new D.A. should make the decision.

Boston, who was elected as D.A. in November 2016, said she would review the case once she was sworn into office in January. A video of the news conference she held to announce her decision to dismiss the case can be viewed at: https://youtu.be/OA-BVuupkjY.