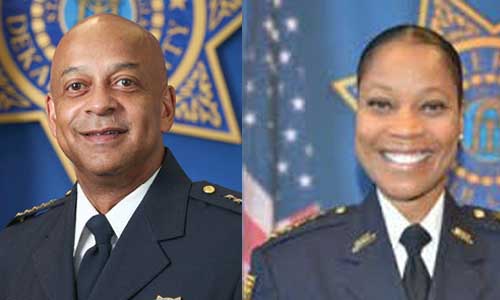 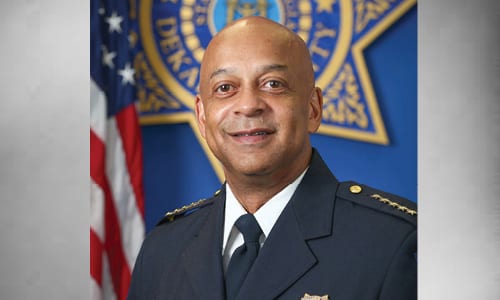 DeKalb County Sheriff Jeffrey L. Mann announced that he will retire from his elected office on Nov. 30, 13 months before his term is up. Mann’s early departure means that Chief Deputy Melody Maddox will take the helm as the first female sheriff in DeKalb’s 197-year history and will remain in the position until a special election is held in 2020. Maddox served as Chief of Police for Georgia Piedmont Technical College from 2016 until Mann appointed her chief deputy, second in command, in June.

Maddox, who will appoint a new deputy chief after she becomes sheriff, said she is looking forward to serving as sheriff.

Mann did not specify in a Nov. 14 statement announcing his retirement why he was leaving early. The statement, which included s 742-word letter to constituents, said he would make no further comments and no news conference was scheduled.

Mann has been fighting the revocation of his certification from the Peace Officer Standards and Training Council for the past two years. He lost his certification after he was arrested in 2017 on indecency and obstruction charges. According to a police report, an Atlanta police officer was patrolling Piedmont Park one Saturday night on foot in an “area known for sexual acts after dark” when Mann exposed himself as he walked in the direction of the officer.  Mann reportedly ran when the officer shined a flashlight on him but eventually surrendered after the officer chased him.

Mann pleaded guilty to obstruction and prohibited conduct. He was fined $2,000 and ordered him to perform 80 hours of community service. The city of Atlanta banned Mann from its parks for six months.

In the letter to constituents, Mann said:

Fellow DeKalb County Citizens:  It has been my honor and great privilege to serve as your DeKalb County Sheriff for the past five and one half years. On four different occasions you have gone to the polls to cast your vote for me. For that I am grateful and truly humbled that you placed your trust in me. I trust that I have served you well in my duties as Sheriff.

Leading a team of over 1000 individuals, employees and vendors alike, I am extremely proud of the accomplishments of the DeKalb County Sheriff’s Office. I thank them for allowing me to serve and for their phenomenal dedication, hard work and professionalism.

While there are many accomplishments for which to be proud, none stands out more than our continued Triple Crown status awarded by the National Sheriffs’ Association. This honor commemorates the recognition of best practices utilized in all aspects of sheriff’s office operations. With a combined nearly 800 individual standards, the only three national accrediting agencies (American Correctional Association, Commission on Accreditation for Law Enforcement Agencies, and National Commission on Correctional Healthcare) have rated the DeKalb Sheriff’s Office among the elite in the nation. One hundred percent of all mandatory standards and an average of over ninety-seven percent of all other standards were in compliance during the most recent assessments. Only 41 of the 3,083 sheriff’s offices nationwide hold this Triple Crown Accreditation distinction, and only 17 of those offices have held that distinction under two successive sheriffs. The work of our team in this regard should not be underestimated. It ensures that your tax dollars are spent wisely, the work is performed efficiently and effectively, and incarcerated persons are treated humanely and with dignity.

Community engagement helps to reestablish and preserve the public’s trust in law enforcement. Our community is not as safe as it should be without that trust. During my tenure we redoubled our engagement efforts in community events such as speaking at homeowner’s association meetings, establishing mentorship programs at middle schools, participating in community national night out events, celebrations and parades, conducting roll calls for deputies at schools and senior centers, and inviting community groups into the jail for tours to promote transparency.

Our work surrounding criminal justice reform has been particularly rewarding. Easily, one of the crowning achievements of my administration. We have been working diligently on formally transforming operations into a Jail-to-Community Transition Facility. The goal is to utilize recently explored community-based reentry business models for local jails. This model provides those in our custody the tools necessary to participate fully in our community resulting in reduced recidivism. This too adds to the safety and security of our community.

The expansion of our inmate services program has been vast. In addition to our GED program, the implementation of our Options for Living and Learning and First Choice programs has provided further tools to assist inmates in their rehabilitative efforts. From classes that address mental health and substance abuse issues, to those that focus on behavioral modification, anger management and life skills, this series of 35 classes has been well received and sought after by those in custody. Professional instructors routinely comment on the effectiveness of the programs, and as we continue to collect data, we are confident outcomes will be changed for the better.

Our collaboration with State and County workforce development agencies and Georgia Piedmont Technical College has resulted in vocational training and career preparedness for our incarcerated population. Students work towards their welding certification. Additionally, other wrap-around services such as job readiness, housing, and transportation are also provided. We are soon to announce a public-private partnership with several fortune 500 companies based in Georgia to provide for the initial sustainability of this program. Finally, we anticipate our dual track GED and machine technical vocational program will be up and running by the end of the year.

Having said all of the above, I am announcing that after 26 years with the Sheriff’s Office and the County Law Department I am retiring effective November 30, 2019. As this election season approaches, I’d like to leave elected office hopeful that all appropriate and due focus will not be on me but on the phenomenal work our team has accomplished and the substantive challenges that shall continue to shape the best possible future of the entire DeKalb community.

Again, I am greatly appreciative of you allowing me to serve. God Bless!