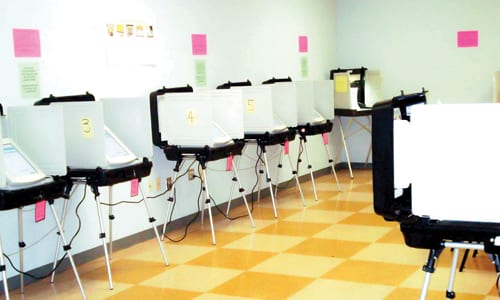 Rockdale County voters will no longer cast their election ballots at school precincts. The county is taking voting out of schools and moving precincts to other locations effective May 22, when the General Primary and non-partisan elections will be held.

Supervisor of Elections Cynthia Welch said the Board of Elections and Voter Registration approved the moves to ensure the safety of students and staff. Although the moves come in the wake of the recent mass high school shooting in Parkland, Florida that claimed 17 lives, Rockdale has been working on a plan since last summer, Welch said.

“Last July, we formed a committee comprised of three members from the public and two of my staff members to address the issue of safety,” said Welch. “We were concerned about protecting students and teachers. Normally, the doors at our schools are locked, but on Election Day, they must remain open. There was a concern that with so many people coming in, someone could wander down a hall. The board did not feel that it was safe to continue operating this way.”

Welch said that while security during elections has not been a problem in Rockdale, the county wants to do everything it can to avoid tragedies such as the one in Florida.

“We don’t want to take any chances,” Welch said.

Rockdale has dealt with gun violence at school. Six students were injured, one of them critically, when a sophomore at Heritage High School walked into the school on May 20, 1999 and opened fire. The gunman, who was disarmed by an assistant principal, served 16 years in prison after being found mentally ill.

Welch said about 43,000 voters will be impacted by the precinct changes. Notifications will be included in the March water bills and every voter impacted will receive a new precinct card within the next three weeks.

Qualifying for this year’s elections begins on March 5, at 9 a.m. and will end on March 9 at noon.