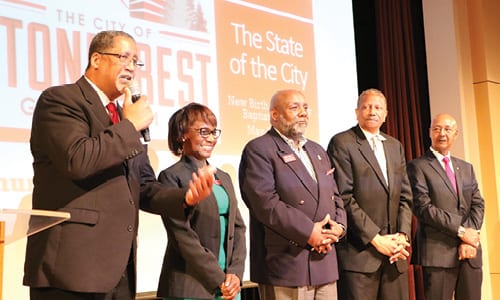 Stonecrest Mayor Jason Lary touted a “fully operational City Hall” and administration that is on track financially, during his state of the City Address on May 31.

“It’s been a banner year for building the city: No tax increase and operational excellence,” Lary said.

About 100 people, including Congressman Hank Johnson and his wife Commissioner Mereda Davis Johnson, Commissioner Gregory Adams and DeKalb CEO Michael Thurmond, attended the address, which was held at New Birth Missionary Baptist Church. Thurmond was the program’s guest speaker to celebrate the occasion.

“Mayor Lary, we celebrate you. I congratulate you on the vision, the commitment and integrity,” Thurmond said.  Thurmond encouraged Lary to remain steadfast in his vision.

In presenting an overview of the city’s finances, Lary said the city collected in its first year:

Lary also expressed excitement for the Atlanta DeKalb Caribbean Carnival, which brought an estimated 25,000 people to the city for the Memorial Day weekend. Lary praised Vaughn Irons for the collaborative effort with Atlanta Sports City, to bring a parade of 3,000 participants and a day-long festival that turned into a night-time party in the parking lot of the former Kohl’s building at the Mall at Stonecrest. The event was colorful and orderly, said Lary, who along with the city council members, rode in the parade. There were no known disorderly incidents and business boomed for many merchants.

To watch the video of Mayor Lary’s address, visit ocgnews.com.