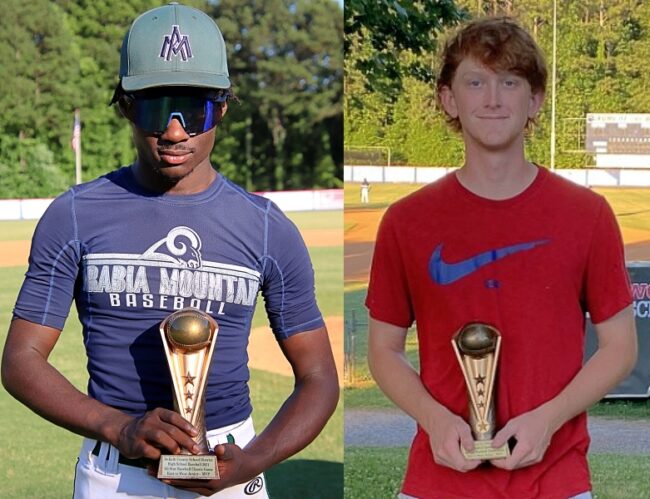 Six innings of scoreless pitching keyed a 16-5 win for the West Junior All-Stars against the East in the 12th Annual DCSD Junior All-Star Classic baseball game held recently at Dunwoody.

The tone was set early as Dunwoody’s Zach Heavern pitched two perfect innings to open the game. He struck out four of the six batters he faced. Heavern would go on to win the West squad’s MVP award as he went 1-2 at the plate while being hit by a pitch after his two strong innings on the mound.

Druid Hills’ Colin Ross gave up a hit and two walks with two out in the top of the third, but got a ground ball off the bat of Southwest DeKalb’s Sadir Ryan to end the threat.

The West picked up five more runs in the bottom of the third on a two-run single by Towers’ Demetres Broughton, a RBI triple by Mekhi Lloyd and a sacrifice fly by Dunwoody’s Connor Haynes to extend the advantage to 11-0.

Arabia Mountain’s Devin Tallington came in in relief of Clarkston’s Brandon Cooper to shut down the West bats for three innings to keep the game at 11-0 heading into the top of the sixth.

The East put two runs on the board in the top of the sixth as Ryan and Stephenson’s Jaden Camp both walked and scored on an error with two outs against Broughton to make it an 11-2 game.

Tucker’s Andre Hunter worked out of a nobody-out and runners on second and third as Stephenson’s Michael Wright caught a fly ball and cut the West runner trying to tag and score from third down at the plate for a double-play. Hunter struck out the next batter to end the inning.

Hunter answered in the top of the seventh with a bases-clearing, three-run double as the gap closed to 11-5. Chamblee’s Taylor Flowers had three strikeouts in the inning, including the first two batters before allowing four consecutive batters reach and striking out the final batter to end the threat.

The West picked up an unearned run in the bottom of the seventh as Broughton reached on an error and scored on a fielder’s choice to third by Lakeside’s Malachi Cloud to make it 12-5.

Flowers set the East down in order in the top of the eighth and final inning, including his fourth and fifth strikeout of the game.

The West picked up four more runs in the eighth to end the game. Brady Jones of Decatur singles, stole second and third and scored on a wild pitch and Nathan Pettit followed by scoring on a wild pitch. Broughton had a sacrifice fly and Lloyd grounded out to second to score another run to make the final of 16-5.

Isaac Terrell led the West at the plate going 2-3 with two RBI. Max Fishbein was 1-3 with two RBI and two stolen bases and Demetres Broughton was 1-4 with three RBI. Connor Haynes and Brady Jones both tied the game record for stolen bases with three each. It tied the record set by Lithonia’s DeAngelo Smith in 2010.

Andre Hunter was 1-4 with three RBI to lead the East while Sadir Ryan was 1-3 with a double and scored two runs. Devin Tallington was named East MVP after pitching three scoreless innings that allowed the East to close the gap from 11 to six runs. Tallington struck out three, walked none and allowed two hits in his three innings of relief.